Cockroaches, earwigs, and termites are among the different bugs that can invade your home’s crawl space. If left unhindered, these pests can breed exponentially, causing infestations. Now you’re wondering if it’s okay to bug bomb a crawl space. We researched for your convenience and here’s what we found.

It’s not advisable to use a bug bomb in a crawl space. Otherwise, chemical residue can seep through the floor above, leaving a significant mess. However, homeowners may attempt to use insect foggers in their crawl spaces if they practice appropriate preparatory measures.

Property owners should know the pests that can potentially invade their crawl spaces. Keep reading as we talk about these insects in greater detail. We’ll also discuss the necessary steps to bug bomb a crawl space properly.

Do Crawl Spaces Have Bugs?

Many insects find moist conditions to be ideal to live and breed. Dark and concealed areas, particularly crawl spaces, can also help protect these pests from potential predators. Some bugs that can enter and reside in crawl spaces are:

Termites often find wood attractive. Different termite species have varying preferences. Some of these insects would prefer moist wood while others prefer dry wood. Wooden structures like foundation posts found in crawl spaces can invite termites to nest in these areas.

Crawl spaces with foodstuffs and sufficient moisture will invite cockroaches. These critters also typically like dark locations so they can hide and breed. Homeowners that don’t maintain their homes’ crawl spaces may expect a rapid roach infestation for each cockroach egg capsule contains about 16 eggs.

Earwigs can enter through small gaps, which can include poorly sealed crawl space openings. Although these insects generally like to be near light sources, damp areas like the moist surfaces of crawl spaces may also appeal to them.

Silverfishes have flat, slender bodies that are about ½- to 1-inch in length. These insects can invade crawl spaces without proper moisture control in massive numbers. Silverfishes are moisture-loving creatures and often hide underground or inside wooden floors and posts.

Can You Put A Bug Bomb In Your Crawl Space?

It’s not ideal to open a bug bomb or an insect fogger in enclosed areas like crawl spaces, particularly if these locations don’t have proper ventilation. Also, these products generally soak the surfaces with their chemicals above ground if operated in crawl spaces.

Homeowners will need to clean up the messy outcome if they proceeded with this operation.

However, some members of DIY communities found ways to bug fog crawl spaces with minimal risks of creating mucky results.

If you plan to proceed with this task, you need to ensure that you're going to fog your crawl space on a particularly warm and sunny day. Aim to use the product on a day with an outside temperature of about 70 degrees Fahrenheit.

Otherwise, using the fogger on a cold or humid day can increase the risks of the chemicals leaving liquid residue. Also, make sure that you close your crawl space’s vents. Use plastic wrap over the vent covers if necessary.

Additionally, turn off the furnace or heat pump, open your home’s windows, and get ready to leave the dwelling for about an hour.

Finally, you need to wear a respirator and a pair of disposable gloves. Insect foggers typically spread their chemicals almost immediately upon removing their sealed covers. Therefore, practice safety during the removal process to prevent potential health hazards.

Once you finished the preparations, follow the rest of this guide:

Check out these bug foggers on Amazon.

Once the bug bomb is releasing its fumes, leave the house and return after 1-hour. You can return to the premises after 2 hours if you want to be extra careful. Then, wipe the surfaces with a clean cloth or rag to remove the residue produced by the fogger.

For more information about bug bomb usage, read our post on that topic. Additionally, you can watch the insect fogger safety video below by the United States Environmental Protection Agency (EPA).

You can also use a dehumidifier to remove excess moisture from the crawl space once the fogger finishes its task. Read our post on the right dehumidifier size to use in a crawl space for more details.

What Happens If You Breathe In Fogger?

Staying in the premises where a bug bomb has been releasing its fumes may cause different health issues. Some problems that animals and humans may experience when breathing in bug bomb fumes are:

Keep in mind that direct exposure to a bug bomb's chemicals puts an individual at great risk of experiencing the hazards mentioned above. Asthmatic people or those with serious respiratory conditions like reactive airway disease may experience aggravated symptoms because of contact with insect foggers.

If someone breathes a significant amount of bug bomb fuse, move that person out of the property as soon as possible. Then, seek medical help immediately before the adverse reaction becomes more severe.

How Do I Keep Bugs Out Of My Crawl Space?

Installing a moisture or vapor barrier in a crawl space is one of the different solutions that can help keep insects away from the area. As its name implies, this material significantly reduces or prevents moisture from entering different areas like crawl spaces.

Some building codes even require the installation of vapor barriers in crawl spaces. For instance, unvented crawl spaces need to have a continuous polyethylene vapor barrier. The setup should cover or overlap the material’s seams of no less than 6 inches.

How To Install Vapor Barrier In Crawl Space?

The first step to a vapor barrier installation in a crawl space is to ensure the area is clean. Also, remove and replace old pieces of wood with new units. Then, remove everything on the space’s floor. If not, the barrier’s material can trap those items, which can promote foul smells because of product decomposition.

After making those precautions, you can move to the rest of the job:

Watch the video below to learn more about installing a vapor barrier in crawl space:

It’s possible to bug bomb a crawl space but it comes with certain risks. Homeowners that don’t follow the correct precautionary measures may make significant messes to the floors above their crawl spaces. If using an insect fogger isn’t an ideal solution, other options like installing a moisture barrier can be better choices. 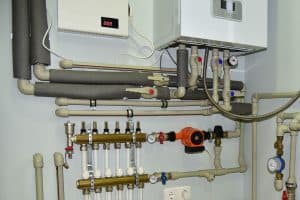 Can You Put A Water Heater In A Crawl Space? [Including Tankless] 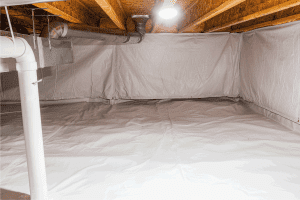 Can You Put A Furnace In A Crawl Space? 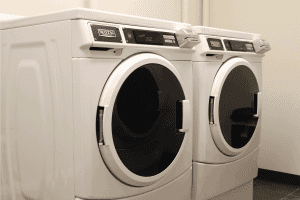 Can You Vent A Dryer Into A Crawl Space?