Wood basements have been around for a long time. You can see them in older and even modern houses. Though they've had a bad reputation throughout the years, have you wondered how long they do last? In this article, we have researched and asked the experts that same question, so stick around to find out.

With the proper care and regular maintenance, wood basements and foundations can easily last up to 100 years. Various federal agencies have proven this through their research for the past 40 years. It is important to remember that if a house has a wooden basement, its foundation is also wood.

Continue reading as we discuss more in-depth details about wood basements like their pros and cons, how well do they compare to concrete basements, and more.

Are wooden basements any good?

Before the craze of concrete home building, in the early stages of modern society, houses and commercial buildings with wooden basements were very common.

This is evident in old towns across the country that have preserved their vintage look throughout the years. Old hotels, houses, and businesses all have wooden basements and foundations as this was the most common and cheaper material available at that time.

Even today, the number of houses made out of wooden foundations is still very large. The majority of these houses were made decades ago. According to the Western Wood Products Association, over 90% of houses in America are made out of wood.

Wood can be treated, this makes the wood less susceptible to damage such as termite infestations and water damage.

Wood is also very easy to repair compared to other materials. It is easier to replace when it is broken as supply is easy to find. In rural places, wooden houses are the most common as it is the most abundant building material around.

Wood is also very reusable, some chopped-off parts that will not be used for house building can be used for other construction such as furniture and decor.

The added aesthetics that wood brings are also far more superior than concrete. A wooden basement can boost the value of your house, especially if you use expensive wood to build it such as sandalwood, or pink ivory, for examples.

Compared to a poured foundation, wood is less likely to crack and less likely to settle. This is because a wooden house is lighter than a concrete one.

A wood basement would have to be waterproofed thoroughly as they are more prone to water damage. Waterproofing a wooden basement is very time-consuming and in some instances, it can take longer than building the entire basement itself.

Due to concrete being denser it tends to hold up better when it comes to stress. The buildup of repeated weight being put on your basement as years go by would be tougher on wood compared to concrete.

Although concrete has its fair share of troubles when it comes to combating stress, more so if cracks have already formed, But generally, concrete holds up better, particularly if the overall weight of the house would be heavy.

Like any other material, wood has its pros and cons. But you can definitely make a wooden basement last long, especially if you slab its flooring. This will help in blocking ground moisture from seeping in and wreaking havoc on your basement.

You can check out one of our previous articles regarding wood basement titled, "What Wood To Use For Framing A Basement?"

The US Department of Agriculture determined that wood foundations can hold up even without any protection such as dehumidifiers and anti-moisture agents used in constructing the basement and the foundation.

Their multi-year study concluded that wood foundations can withstand the adverse effects of weathering and moisture by themselves.

If you add more protecting equipment like waterproofing, dehumidifiers, and insulators to your foundations and basements it will surely last as long as any other materials and is not worse than any other types of foundations.

We have previously written a similar article about using wood in your basement titled, "Should You Use Pressure-Treated Wood In A Basement?" Check it out for more wood basement-related topics.

What is a permanent wood foundation?

This method makes it possible for wood to become sturdy enough to be used for foundation walls as it adds protection from damage caused by insects, moisture, and humidity.

The ballpark figure for having a permanent wood foundation can range anywhere from $5,000 to $17,000 depending on your location, design of the structure, and size.

Permanent wood foundations are permitted by the International Residential Code (IRC) under its chapter four-section R401.

Can you add a basement to an existing house?

Yes, it is possible to add a basement to an existing house, but this is always not the case. Multiple factors should be considered first before attempting such a major undertaking.

Adding a basement is a very major renovation to your house and can cost a lot of money, with prices ranging from $18,000 to $30,000. You would have to hire engineers and contractors for this project as this can alter the foundations of your house.

It would be a lot easier if you already have a crawl space, as there is already a portion of the house that is already elevated.

There would be a lot of excavation that could be very messy and labor intense. There would be portions of the house that you cannot use, in some instances you cannot use the entire house at all. Some families rent out other homes when major projects like this are done to their houses.

But having a basement does add function as it gives you more space for storage. Basements can also be transformed into a secondary living room for the family. It also adds value to your property.

How much does it cost to replace a wood foundation?

It could be impossible to give a ballpark figure for the cost of replacing a foundation as there are too many factors that should be considered as the type of wood to be used as a replacement, current damage assessment, and so on.

But a foundation replacement typically averages $300-$1,000 per linear foot of foundation. you would also have to factor in your labor, which heavily depends on how hard the replacement project will be.

When you are already in need of replacement, this also means that there is already significant damage to other parts not just your foundation. You would also have to factor those in as well.

When replacing a foundation, you also have the option of adding a basement. If you choose to add one, this will significantly add to the cost of the repair.

Finding out whether only a portion of the foundation needs replacing or the entire thing will also have a huge impact on the cost of the project. The variables of the undertaking are just too many to precisely identify the range of the cost.

What we recommend is to have it checked out by a professional as they will be the one giving you a more accurate rough estimate on the budget that you would have to release to fix your foundation.

Wood is just as good as other materials and can last as long as well, but you would have to do more maintenance to it compared to cement. Wood continues to be the top choice for homeowners because of its cheaper build cost and its abundance in the country. 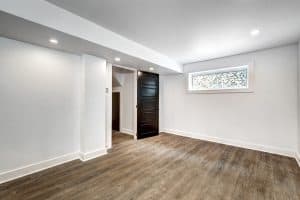 How Thick Are Basement Floors? 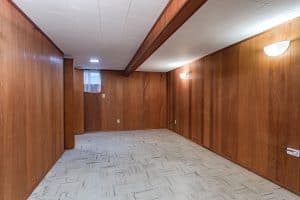 Should Basement Floors Be Light Or Dark? 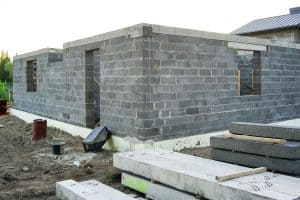