Whether your basement is finished or not, you may be wondering whether to open the stairwell or leave it closed. We researched on your behalf to provide the following information that will help you make a credible choice.

A basement stairwell should be open for the following reasons:

Continue reading to learn in detail the purpose of opening your basement stairway, the cautions to observe, and the costs involved.

Do You Need to Open Your Basement Stairwell?

Opening the stairwell is possible provided the wall on the stairs that will be opened does not bear any load, meaning it does not hold part of the weight of the building.

After you have made up your mind to go ahead with the project, discuss with your contractor to choose a suitable design.

Several factors would entice you to open your stairwell. These factors include:

More Light In The Stairway

If going down the stairs into your basement is a little creepy because it is dark, then it may be time that you do some minor renovations to let in more light in this space.

However, it would be important to ensure that the basement is properly insulated. If it is not, then the conditioning of the rest of the home upstairs may be interfered with by opening up the stairs.

Removing the door at the base of the stairs if there is one, followed by removing part of the wall on the side of the stairs that do not bear a load, will let in light from the basement window.

You may simply want an open feel, especially if you don’t have children or pets that may keep going down to the basement.

If you have a finished basement and you use it to do your work-out, hang out with friends, or for some other useful reason, then having the stairwell open may be the best option.

Some homeowners have a knack for everything looking nice, and they would want the stairs to be more appealing. A closed stairwell would be drab and boring to them.

With countless options available, having an open beautiful stairway is not too far off.

Some closed stairways do not allow the movement of furniture. That is why moving big furniture like a bed or sofa to the basement may require you to open part of the stairwell to allow room for movement.

To Finish Your Basement

Most finished basements have open stairwells, and if this is the project you have in mind, opening it would be a viable idea.

How Do You Open A Basement Stairwell?

Here's how to open a simple staircase that has two walls on each side going down a basement. As described above, the side that will be opened does not bear any load. To proceed, follow these basic steps:

Check out this handrail on Amazon.

Have a look at this spindles on Amazon.

Below is a video that illustrates how to open your basement stairwell:

Can You Open A Staircase With A Load Bearing Wall?

It is important before you remove a wall from a stairway, to determine whether it is load bearing. There is a danger of the ceiling sagging or dropping if you remove this wall as it holds up the ceiling joists.

If it has to be opened, modifications have to be done to ensure that the weight of the building has support onto which it can place its weight.

Signs That Show A Wall Bears A Load

So, how can you tell a wall that is load bearing? Look out for the following signs:

Walls bearing load are at 90 degrees perpendicular to the supports such as beams, frames, and joists. If it is not, then it will be running parallel to the supports.

Several Walls Stacked On Top Of Each Other

Check the lowest to the highest point of the staircase in your home, and if you notice several walls one on top of the other across the floors, then the wall you may be planning to open is load-bearing.

Grab a copy of the original architectural blueprint from the office of the county clerk. Anywhere you see the mark S means the walls hold the structural weight of the building.

Nearer To The Center Of The Home

If the wall is farther away from the external walls of your home, but closer to the center, then it is likely it is load bearing.

How To Tell A Wall That Is Non-Load Bearing

These walls are known as partition or curtain walls that divide between rooms. It is still difficult to distinguish this wall, but a sure sign is when you know it was built in during renovations. Otherwise, if you cannot tell, it's better to talk to a professional.

The Pros And Cons Of An Open Stairwell

The pros and cons of an open basement stairwell largely depend on the lifestyle you and your family live.

As indicated above, if you do not have young children or pets that could injure themselves due to climbing over an open stairway, then it may be the most appropriate.

You make your house more stylish by installing or renovating steps with a modern and contemporary design.

The only main drawback that may be associated with an open stairwell is that it might be a waste of money to have a set of stylish steps if you will be using it purely for practical reasons to reach your basement quickly.

Opening your basement stairwell is fine if the wall in question is not bearing any load, to prevent the building structure from weakening.

There are several reasons you may want to open your basement stairs, which largely depend on the purpose for which you are doing so. Some reasons are simply because you desire a more stylish look, or you want it opened up to create space for moving furniture to and from the basement.

Consult with a professional if you are not sure the wall you want to open is holding load or not. You are much safer than risking doing a job that may end up bringing problems to your home.

You may want to read our previous posts and find out more on basement walls bearing load, and the purpose of stringers on basement stairs: 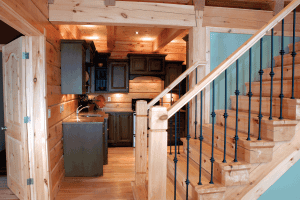 Can Basement Stairs Be Moved? [And What To Consider Before Getting Started] 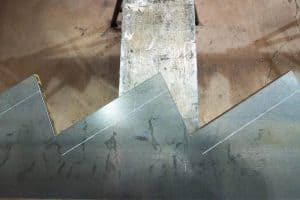 What Are Bilco Stair Stringers Made Of? [And What Sizes Are They] 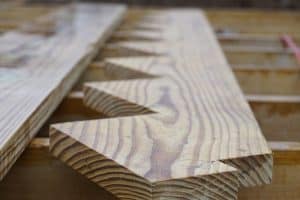 How Do You Measure For Basement Stair Stringers?